Satopanth Trek . Best high altitude crystal clear green lake Satopanth. Trek through Vasudhara waterfall, best walk through the last village of India, 'Mana' one can get Meet with Moni Baba near the lake. Cross three glaciers and one narrow valleys during the Satopanth trek to swargarohini path trek.

Satopanth Tal -The Glacial lake which is around 25kms from Badrinath, could be reached after a arduous trek crossing Lakshmivan and Chakratirtha. Natural Caves along the path are used as the night shelter. Around Badrinath every place is steeped in legends so are Lakshmiban and Chakratirtha. It is said that goddess Lakshmi ( goddess of wealth)and her husband Narayan meditated in Lakshmivan and Chakratirtha respectively and while meditating Narayan kept his famous Sudarshan Chakra on the valley which depressed by the weight of that Chakra to form a beautiful round shaped meadow surrounded by lofty mountains..... Traversing on to satopanth glacier and hours of hard trekking on the treacherous moraine under the last ridge until reach the lake.The first thing that strikes is the strange ethereal ambience of the lake. Calm and Soothing! probably because an achievement of hard labour or may be the legends, or endurance !. The perfectly triangle shaped lake at the base of the snow crested Chaukhamba I peak, surrounded by lofty mountains. The crystal clear water of triangular lake mirrors the snow crested Chaukhamba I peak. It is said there lies a path traversed by the pandava brothers on their last journey to the heaven..........Finally satopanth tal trek is just for hardcore trekkers indeed!

Satopanth Tal is a lake in Uttarakhand, India, located in the midst of snow-capped peaks at an altitude of 4,600 metres (15,100 ft) above sea-level. The lake is considered to be of religious significance to the local people; residents of Mana village throw the ashes of the dead in the lake. There is a saint known as Moni Baba, for he had stopped talking from a very early time. There's common belief that he can live only on sun and air, if food is unavailable. 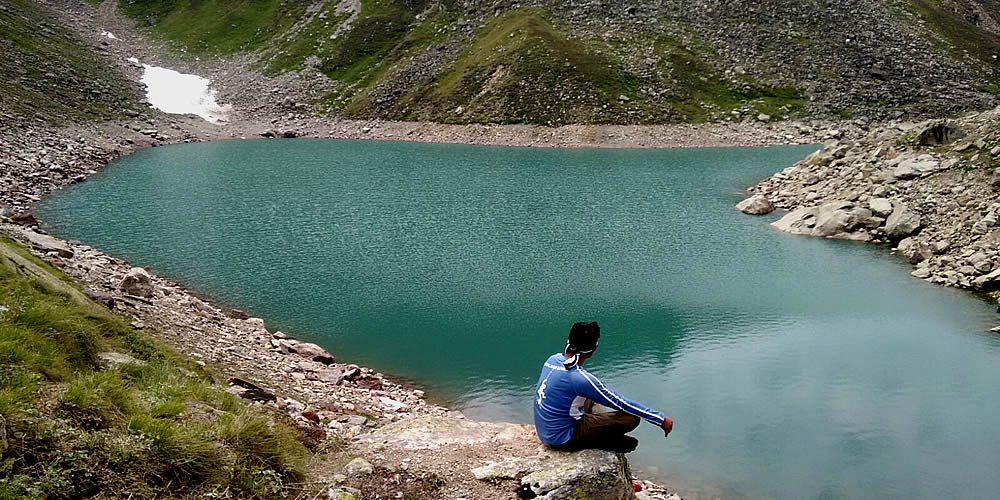 Swargarohini Yatra ensures the pilgrims a lifetime experience through the sacred Himalyan landscape with wonderful facilities and opportunities to discover the undisclosed facts about Satopanth-Swargarohini, Paradise on earth According to Hindu mythology, Satopanth Tal is on the route taken by the Panch Pandavas on their Sadhea Swarga Yatra. At various places their name remains as a memorial of this sacred journey. At the starting point at Mana, 3 km away from Badrinath, is the natural rock bridge, Bhima Pul. Here, Bhima is believed to have made the bridge over the river Saraswati so Draupadi could cross. At Lakshmi Ban, Draupadi is believed to have breathed her last. In the austere barren landscape at an altitude of 12600 feet, strewn with huge boulders, Bhurjpatra plants grow in the small patch of Lakshmi Ban. At Bandhar, it is said that Yudhishthir’s thirst was quenched by the baan or arrow shot by Arjun which caused a stream of water to gush forth from the very Earth. At Bhimbar, the rock pillar commemorates Bhima’s release from earthly life. At Chakratirtha the great yogi and warrior, Arjun gave up his body. Ahead, only Yudhishthir with his dog, who was indeed Dharma Raja himself, went in his mortal form, negotiating dangerous glaciers and hidden crevasses. At Satopanth Tal, the celestial rath or vehicle received him.

SATOPANTH LAKE
Satopnath Lake is one of the difficult trekking spots in Uttarakhand and undoubted the most beautiful trekking routes in the himalayas. A triangular glacial lake it is located at a height of 14, 300 feet in the Garhwal Himalayas and it is believed that the divine Trinity of Brahma, Vishnu and Mahesh had meditated here and each corner of the triangular lake is named after them. The journey will surely give you that perfect adrenaline rush as the trek is a precarious one. The lake is located a few kilometers from Mana Village, on the way to Badrinath.It lies beneath the Badrinath peak, Satopnath Lake has a number of mythological stories related to it. Nestled amidst the garhwal region of Himalayas, the journey to Satopnath is a trekker’s paradise. So pack your rucksack and start off for Satopnath Lake near Badrinath.

Short Tour Program :: Tour can be start from Delhi to Delhi as well Haridwar to Haridwar too.

Trip Option One From Badriath to Badrinath

Trek end up at arrival in Badrinath. 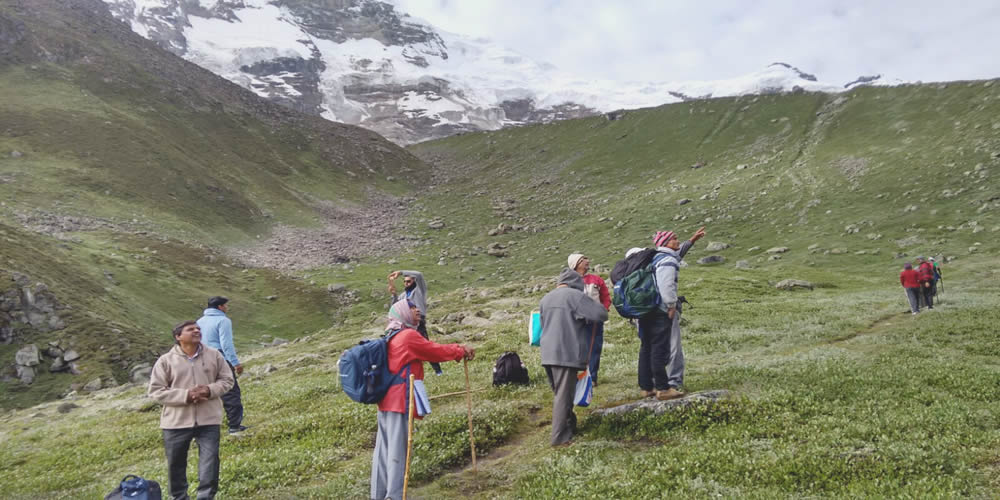 Day 2 (Joshimath - Badrinath)
Next Day Drive from Joshimath to Badrinath , one of the famous dham of Hindu Religion. Visit Badrinath Night Stay at Badrinath

Day 3 (Mana - Bandhar) 13 kms
On Day three we will Star our Trek towards Bandhar, in the midst you will see Mana the Last Indian Village before Tibet Border. there is a Waterfall Called Vasudhara, which is known as a holy waterfall which will wash your sins according to the Hindi Scriptures.

Day 4 (Bandhar to Satopanth - 13 kms)
The trail was through bolder zones. You will cross the Sahasra Dhara and the Neelkanth Base Camp on our way. Specifically, there is no trail, you just have to make your own way with the Guide. You will see the Alakapuri glacier, which is the source of Alakananda river.

Day 6 (Satopanth Tal to Chamtoli)
Chamtoli is Basically a Bugyal

Day 7 (Chamtoli - Mana- Badrinath)
Now We will Trek Back to Mana then Drive back to Badrinath , Night stay at Badrinath.

Day 8 (Badrinath- Haridwar)
Early morning after Breakfast e will Drive Back to Haridwar where leaving the Hills Behind.

The Package Cost is Inclusive of:

Package Cost does not Include:

1. Items of personal nature e.g. table drinks, telephones, laundry, insurance, medical services and services in unforeseen circumstances.
2 . Extra Porter on trek. ( Can be arranged on actual by the guide on the trip)
3. Any other trip other than specified above.

The above Cost is :

1. Subject to Government service taxes which is 5% at present.
2. Net
3. Valid for the Trekking season for March to November. 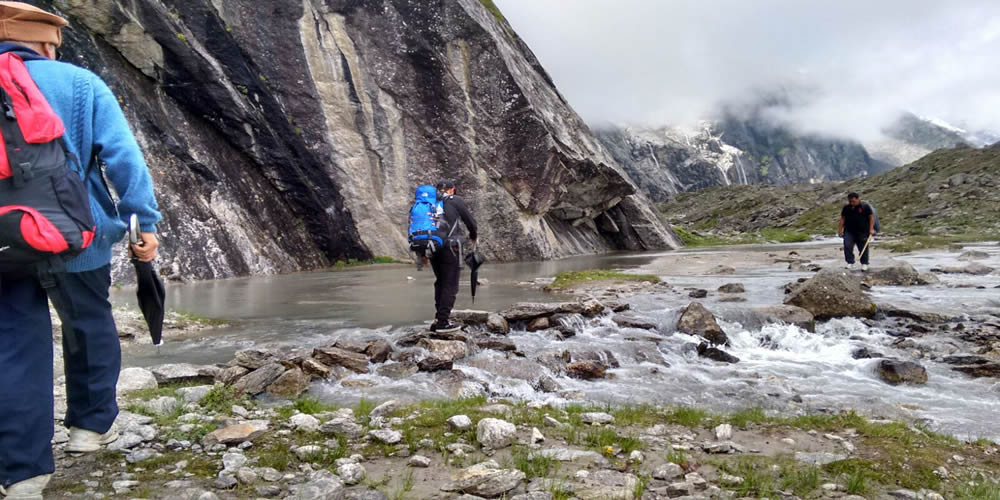